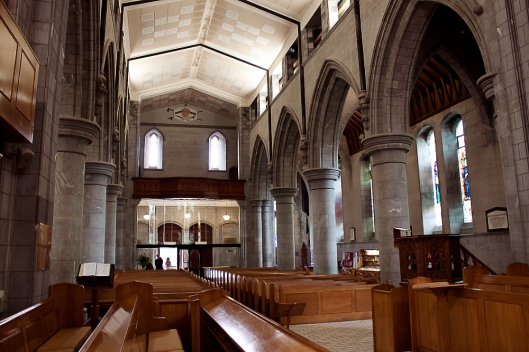 I recently returned from a trip to New Zealand. Unlike a trip to Europe where one wanders the narrow, cobble-stoned streets (more like small alleyways) of old cities, this trip was more about enjoying the rolling hills dotted with grazing sheep, the high mountains, the many waterfalls in misty fjords, the bubbling thermal mud pools, and seaside harbors. Unlike a trip to Europe’s great cities where one visits so many grand cathedrals that you lose track of which is which, on this trip we visited only two churches. One in Wellington no longer served as a church because a newer, larger one had been built. It was now a museum, but it was memorable because of its vaulted wood construction and its displaying of two flags along with the New Zealand flag-a 48-star flag of the USA and a United States Marine Corps flag-a tribute to the service we had provided New Zealand during World War II.
Although I was touched by this tribute to my countrymen, it was what I found in the other church that I want to share as we consider “faith matters.” The Cathedral in Nelson sits atop a high hill overlooking the city and the harbor beyond. It is surrounded by a park-like area of trees, shrubs, and grass. Unlike those cathedrals in Europe which are primarily Roman Catholic with lots of statuary, grand altars, many side chapels, and in the Orthodox, lots of icons, this cathedral is Anglican. It is simple, quiet, and peaceful.
In each of four corners of this peaceful sanctuary, they had placed a tall, wooden piece that was about 5-feet tall, engraved with Bible verses, prayers, thoughts for meditation and/or questions to lead one in thinking about faith. Three or four chairs had been placed in front of each of these pieces for the comfort of those who might want to spend time in prayer or meditation. The first of these that I encountered began, “Faith seems hard to pin down …” I immediately thought of our Faith Matters series and I snapped a photo of the large plaque. I did the same when I came to each of them. One focused on forgiveness; another, on those troubling concerns of grief, pain, fear; a third, resonated with me when I thought about all the angry words that were being tossed about in our political process. It ended with
Take some time to pray for those who are being exploited by the greed of others, those living in desperate poverty and those who are persecuted, abused and bullied…. Pray too for our own city of Nelson [or we could insert our own] and our nation, for justice in our institutions and fairness in our dealings with people of every land and culture.
Now back to the first plaque that I had encountered.  Take a seat in one of those chairs placed in front of it.  Here is what you will read:
Faith seems hard to pin down, but the scriptures tell us:
“… faith is the substance of things hoped for, the evidence of this not seen.”
So faith is more substantial than we might think!  In addition we read “without faith it is impossible to please God, because anyone who comes to him must believe that he exists and that he rewards those who earnestly seek him.  (Hebrews, chapter 11)
Jesus got excited when he saw people with faith.
He said, “Woman your faith has saved you, go in peace.”
He even healed the child of a man who told him, “Lord I believe.  Help my unbelief!”
He recognised [sic] and rewarded faith in all sorts of unlikely people.  He even encouraged those of us who struggle with faith by telling us, “Even faith as small as a mustard seed will move mountains.”
Faith is like a muscle – the more we use it the stronger it gets.
What do you need faith for today?  Use the faith that you do have to turn to Jesus in prayer and he will answer you.
Submitted by Dianne Stephenson